Rare: Critics are boycotting the biggest anime event on the continent hosted by Houston and here’s why

By: admin
In: News From External Services
With: 0 Comments

Houston anime fans are urging others to boycott one of the largest anime conventions in North America due to sexual harassment allegations against the event’s CEO and manager. 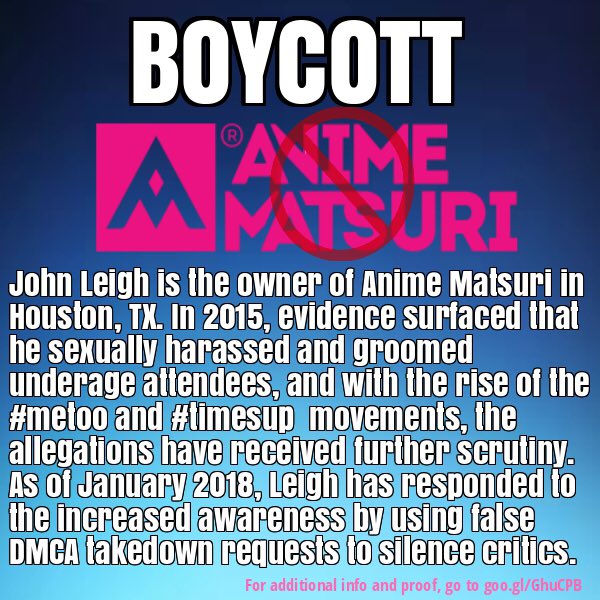 First time hearing about #BoycottAnimeMatsuri? Here’s a quick summary, and more detailed info can be found in the links in our pinned tweet. You can also @ us or send a DM if you have questions. Help us send a message that sexual harassment is not ok in the cosplay community!

Leigh is accused of making unwanted advances on young female cosplayers working with his convention. Cosplay is known as the practice of dressing up as a character from the Japanese genres anime. It is a staple of anime convention culture, and some do it professionally to make a living.

In 2015, Nina Reijnders, a cosplayer who goes by the name Chokelate, came out against Leigh, saying he first made jokes of a sexual nature on a business trip, and later sent her inappropriate messages via Facebook regarding some promotional pictures.

In a blog post, Rejinders further detailed Leigh’s inappropriate behavior, saying she was “concerned for the community.” Rejinders reportedly wasn’t the only one to step forward.

For his part, Leigh maintains his remarks were all jokes, and claims none of his behavior should be taken seriously. In a 2015 blog post quoted by the Press, Leigh states:

As a disclaimer I would like to point out that I joke a lot with my friends or people I consider close. If you are offended by sexual innuendos, dirty talks or comments about boobs and orgasms, you should not be my friend. Online or offline. This means no disrespect and I would suggest not engaging in conversation with me. I act this way with my friends regardless of gender, and as my friend, you should make it perfectly clear that you are uncomfortable with my conversation. I would respect you enough to stop joking.

The 2015 controversy around Leigh seems to have reignited this year when Lolita fashion vlogger Tyler Willis of the cosplay community uploaded a video addressing the allegations against him, which was subsequently taken down and reposted on her Facebook page.

The blog Anime Feminist said in a recent post Leigh’s past behavior is what makes it so necessary to bring attention to the issue again, as he is still in charge of it:

Yes, Tyler is the one still vlogging about the alleged sexual harassment years later, but she’s got 4,000 Facebook fans compared to Anime Matsuri’s national audience and 36,000 2017 attendants. An organization this large using its might against a sole vlogger in an already niche community because she talked about a three-year-old story is what really makes this threat newsworthy.

In the video, Willis, who goes by the name Scarfing Scarves, accuses Leigh of sexual harassment and bad business practices. She has since received a cease and desist letter from Leigh’s lawyers demanding a public apology.

The accusations against Leigh all come from members of the Lolita fashion sub-culture. Popularized in Japan in the 1990s, adherents of the style dress in elaborate, frilly attire inspired by Victorian garments.

The look is purportedly meant to emphasize cuteness and modesty, without sexualizing young girls. There is also no connection to the Vladimir Nabokov’s novel of the same name about a relationship between an adult man and underage girl.

The 2018 convention dates are scheduled for March 29-April 1, and the boycott campaign has already won some supporters:

So I will not be attending Anime Matsuri. It wasn’t an easy decision since I really wanted to go just for the artist and some of them are backing out due to the scandal surrounding which is why I boycotted it for four years and will continue to boycott it.

By not applying to Anime Matsuri as an artist, I’m not just passing up a fun convention weekend; I’m giving up literally thousands in potential income. It’s a lot, but I hope other artists, guests, cosplayers, and attendees will join me in boycotting #AnimeMatsuri as well. #MeToo https://twitter.com/misspenart/status/954088716431081472 …

About the author:John Bogna, Rare Contributor